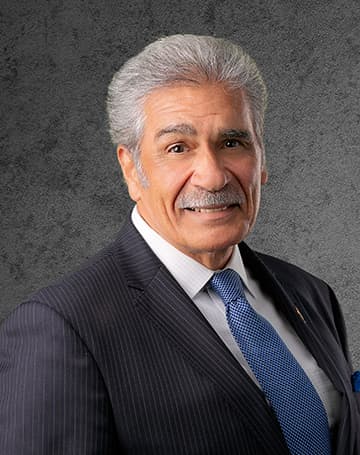 Jess J. Araujo is an Attorney at Law in California and a Senior Founding Partner of the Law Firm of DiMarco | Araujo | Montevideo, and also serves as a Nevada Personal Injury Attorney.

Born in El Paso, Texas, Mr. Araujo attended public schools and spent many summers working in the agricultural fields in Texas and California. He started his professional career by enlisting in the United States Marine Corps during the height of the Vietnam War. He became a specialist and instructor in the Vietnamese language and was Honorably Discharged with the rank of Sergeant.

A Voice for the Community

Mr. Araujo has hosted his own radio programs and has been a frequent legal and issues commentator on all Spanish language national networks. He has been a featured columnist on legal and consumer issues with several newspapers and magazines in Los Angeles and Orange Counties for over 15 years.

Mr. Araujo has taught legal subject classes at the college and university levels since 1978 and has a lifetime teaching credential.

Long active in civic and community affairs, Mr. Araujo has served on a multitude of regional and national boards and commissions and has received countless awards and commendations. His leadership and work on issues that affect the lives of the disadvantaged have won the praise and respect of his peers and the community at large. He currently serves as the Official Legal Advisor/Counselor and Attorney to the Mexican Consulate for Orange County, California, and the Consulate for El Salvador, and since 1994 has served as legal counsel to Nosotros, a national non-profit organization established to promote the interests of Latinos in the entertainment industry. He is a nationally recognized legal scholar, and an expert on, U.S. – Mexican Relations, Latino Electoral Trends, Entertainment Law and Business, Consumer Laws, Plaintiff’s Personal Injury Compensation as well as Applicant’s Workers’ Compensation.

Mr. Araujo is the first and only person born outside of México to receive the “Legion de Honor de México” for exceptional work and achievement promoting the civil, social and cultural interests of México. The Mexican government awarded Mr. Araujo with the National OHTLI Award in 1996 for extraordinary services rendered to the Mexican Community living outside of México.

He is the author of The Law And Your Legal Rights, the first bilingual (English – Spanish) book on U.S. law ever registered in the Library of Congress and a professor of legal subjects at California State University Fullerton. He is a noted composer, musician, and frequent talk show guest as well as a popular keynote speaker and master of ceremonies. Concerned about the demise of the Latino vote, Mr. Araujo created and served as National President of Latin American Voters of America (LAVA), a non-profit, non-partisan voter and civic education organization. He also finds time to contribute to the youth of our country by serving as Co-Chairman of Programa Shortstop Juvenile Diversion Program, a nationally recognized crime prevention program. He is the past president of the Orange County Bar Foundation, and two term past president of the Hispanic Bar Association of Orange County.

Mr. Araujo is the father of two adult children and resides in Orange County California with his wife Donna Araujo, a elementary school teacher.