Who is At Fault if a Car Hits a Bicycle?

When a vehicle and a bicycle collide, it is not uncommon for the cyclist to sustain severe injuries. The unfortunate reality is that bicyclists do not have much protection from the force of a vehicle slamming into them. However, in the aftermath of these collisions, fault must be determined. This is not always easy. Here, we want to discuss who will be at fault if a car strikes a bicyclist. In some cases, the driver of the vehicle may be to blame. There are also scenarios where a bicyclist may hold some or all liability for the incident. 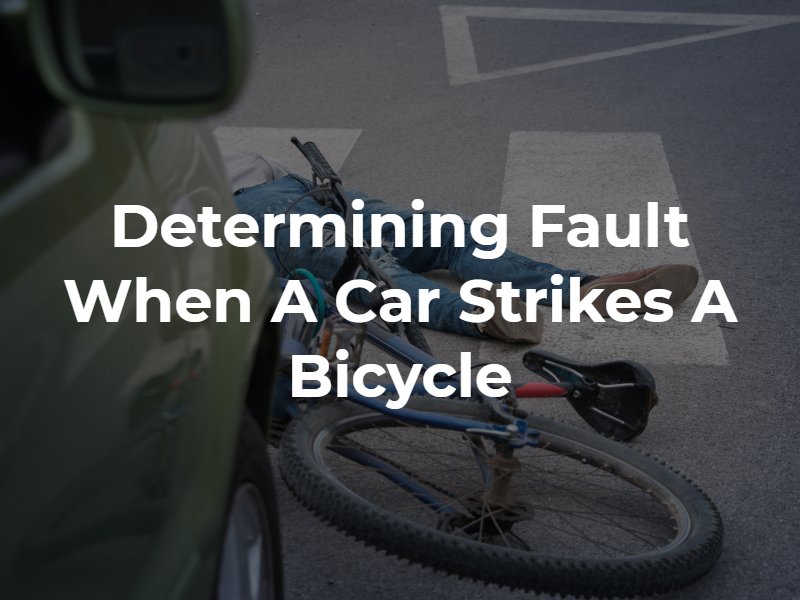 Determining Fault When a Car Strikes a Bicycle

What we will generally find is that if a car hits a bicycle, the driver of the car will be at fault. However, determining fault can be challenging. It is not always straightforward, and just like in regular vehicle versus vehicle accidents, there will likely need to be an investigation into the incident. Some of the evidence that can be used to help determine fault after a bicycle crash includes the following:

It could be possible that a bicyclist shares fault or is completely responsible for a crash, particularly if the bicyclist:

What About Shared Fault and Compensation?

It is entirely possible for a bicyclist to share fault for a crash. Fortunately, California operates under what is called a “pure comparative negligence” system. This means that even a person partially at fault for the crash can still recover compensation for their injuries. In fact, California law allows for those who are up to 99% at fault for their own injuries to recover compensation.

However, the total amount of compensation paid out will be reduced based on the percentage of fault. For example, if a person sustains $100,000 worth of medical bills and other losses in a bicycle crash, but it is determined that they were 30% responsible for the incident, they would receive $70,000 instead of a full $100,000.

Working With a Bicycle Accident Attorney

If you or somebody you care about has been injured in a bicycle accident caused by the negligence of another driver, you need to speak to a skilled Orange County bike accident attorney as soon as possible. These cases can become incredibly challenging, particularly when going up against aggressive insurance carriers or at-fault parties. An attorney can use their resources to fully investigate every aspect of the claim and help clients recover total compensation for their losses.