How is Fault Determined In A California Semi-Truck Accident?

Most drivers do everything they can to operate safely around larger commercial trucks on California roadways. In fact, it is not uncommon for drivers to avoid larger trucks altogether. However, if an accident does occur involving a passenger car and a larger commercial truck, it is crucial to determine liability. Any incident caused by the careless or negligent actions of a truck driver or trucking company has to be fully investigated so that injury victims can recover the compensation they are entitled to. 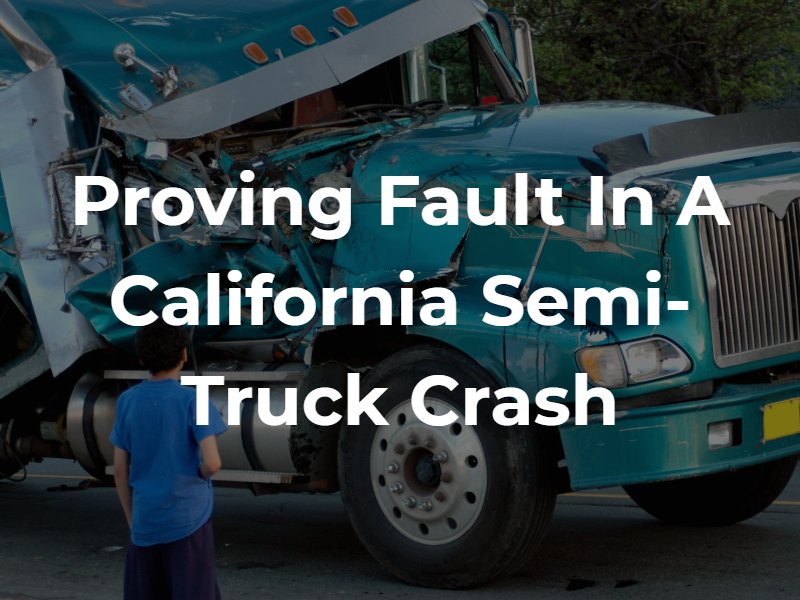 Truck accident claims in California can become incredibly complex. In order for a crash victim to successfully recover compensation from the at-fault party, there will need to be an extensive investigation into the claim to prove what happened. To show fault, it will be necessary to prove that a truck driver or trucking company broke the law or was in some way negligent and that their actions caused an accident.

Further complicating a California truck crash is the fact that trucking companies often do not own the trucks involved in a collision. It is not uncommon for companies to hire drivers as independent contractors, often as a way to avoid liability if an accident does occur.

The key to winning these cases is to gather as much evidence as possible that can point the finger at other parties. This can include the following:

Some of this evidence can be gathered at the scene of the truck crash, including photographs and eyewitness contact information. However, much of the evidence that will be used for a truck accident claim will be gathered in the days and weeks that follow the incident. However, we need to point out that, as the days go on, more and more evidence will disappear or become altered. In some cases, evidence will actually disappear as a result of property damage repair. However, it is not uncommon for the parties involved in these cases to conveniently “lose” or misplace evidence.

If you or somebody you care about has been injured in an accident caused by the negligent actions of a truck driver or trucking company in California, an attorney needs to get involved as soon as possible. When a truck accident lawyer in Orange County gets involved in a case quickly, they can begin an investigation to gather evidence, send a letter of spoliation to other parties involved to keep them from destroying evidence and handle every aspect of the claim on behalf of their client.

You can be sure that truck companies and drivers will have various legal teams and insurance carriers backing them up in these situations. It is not uncommon for them to try and shift blame for the accident onto the other parties involved in the crash, including the injury victims themselves.