What is a Truck’s Black Box and How Can It Be Used as Evidence? 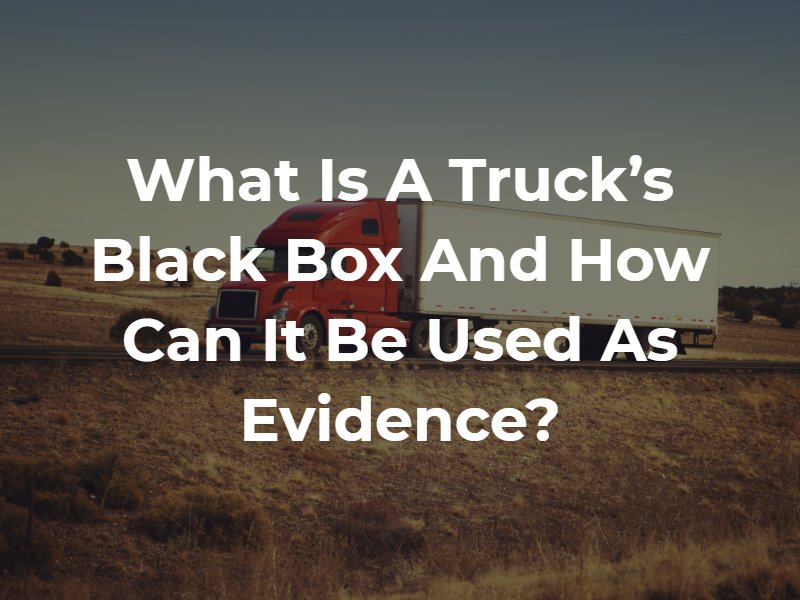 When most people think of a “black box” after an accident, they think of airplane accidents. However, large commercial trucks also have a type of black box that will be crucial in the event a collision occurs. Any person injured in an accident caused by the careless or negligent actions of a truck driver or trucking company should be able to recover compensation for their losses. The black box also referred to as the electronic control module, will be a crucial piece of evidence used to help determine liability in these cases. Here, we want to discuss how a truck’s black box can play a role in a truck accident claim.

The Black Box in a Commercial Truck

Just about every modern vehicle on the roadway has some type of recording device inside. Even though these devices do not record for long periods of time, they will take snapshots of what was going on with the vehicle when some type of incident occurs. Typically, this includes vehicle accidents.

Commercial truck drivers also have something called the electronic logging device (ELD) that keeps track of how many hours they operate during each workday and workweek. These are not part of the truck’s black box, but this data will also be important in the event an accident occurs.

What Types of Data are Located on a Truck’s Black Box?

There is a wide variety of data that will be located on the electronic control module inside of a large commercial truck. This information will usually pertain to vehicle diagnostics, the most recent trips taken by the truck, as well as what was going on with the vehicle right before some type of incident (typically a crash or a near-crash event). The types of data recorded on the ECM will typically depend on the truck or device manufacturer specifications. However, some of the data that we will typically find recorded on these devices include the following:

Some commercial truck companies have begun to implement cameras both inside and outside of the vehicles. We will generally find that these cameras have separate storage devices because of the high volume of data that they record. When working to determine liability for a truck crash, it is important to make sure that all evidence is gathered, including the data captured on the electronic control module as well as data captured on any other cameras or recording devices.

An experienced Orange County truck accident attorney can get involved in these cases very quickly and work to gather all evidence needed to prove liability. They will petition to obtain all evidence from the truck company, including the truck’s black box and any associated data pertaining to the driver.